The Fregoli delusion was first described in 1927 in the paper Syndrome d’illusion de Frégoli et schizophrénie.  In it the authors described a case of a 27-year-old woman living in London who believed she was being persecuted by two actors she often saw at the theatre. She believed these people pursued her, taking the form of people she knew or met.

The Fregoli of the delusion’s title refers not to the authors, but more modestly to an Italian actor, Leopoldo Fregoli, who was renowned for his ability to make quick changes of appearance during his stage act.  In the Fregoli delusion the sufferer often thinks that they are being persecuted by the misidentified person.

Whereas the similar Capgras syndrome involves an under-identification of people and places and it has been postulated that this syndrome results from the inability to match current experience to autobiographical memories.  Fregoli delusion conversely involves over-identification and a seeming confabulation of resemblances between the misidentified entity and the original, so this explanation is not as satisfactory.

I found this paper offers which offers half an explanation:

A partial answer … may come from Rapcsak and colleagues  who described a patient without prosopagnosia who displayed false recognition (over-identification) of faces following the surgical removal of a right pre-frontal lesion. They attributed the patient’s pattern of impairment to an intact reflexive face-recognition system but an impaired reflective or strategic face-processing system, leading this patient to mistake an unknown face for one in memory. This kind of defect might explain some instances of visual over-identification of faces. This account still does not explain selectivity, refractoriness, delusional nature, or multimodality.

The Cotard delusion or Cotard’s syndrome is named after Jules Cotard (1840–1889), a French neurologist. Its more dramatic name is ‘walking corpse syndrome’ and it is characterized by the presence of nihilistic delusional ideation.

Cotard first described the syndrome, calling it le délire de négation, at a lecture in Paris in 1880 whereupon he described ‘Mademoiselle X’ patient who denied the existence of God, the Devil, several parts of her body, and also her need to eat. Later she believed she was eternally damned and could no longer die a natural death. She eventually died of starvation.

In a textbook example of the presentation a patient would hold a delusional belief that they are dead, do not exist, are putrefying, or have lost their blood or internal organs. There may also be olfactory hallucinations, for instance of rotting flesh.  The disorder tends to occur intermittently rather than being chronic and may be a feature of mood disorder, schizophrenia or organic disorders.

Neurologically, Cotard’s is thought to be related to Capgras’s syndrome, and both are thought to result from a disconnect between the brain areas that recognize faces and the those that associate emotions with that recognition. It is hypothesized that if a person recognizes a face but does not experience the expected emotional reaction then an erroneous conclusion can be drawn.  If the face in question is that of a relative or friend then a patient’s lack of emotional reaction is interpreted as being as a result of the relative actually being an impostor.  This is Capgras syndrome.  However if it is the patient’s own face that is not recognised this leads the patient toward a sense that they do not exist and a Cotard syndrome is evident.

Charles Bonnet syndrome is a cause of complex visual hallucinations.  The core features are the occurrence of well formed, vivid, and elaborate visual hallucinations in a partially sighted person who has insight into the unreality of what he or she is seeing.  Its prevalence in patients with visual impairment varies from 10% to 15%.  To diagnose the condition there should not be features which might lead to an alternative explanation such as psychosis, dementia and intoxication.

The syndrome occurs most commonly in elderly people, probably because of the prevalence of visual impairment in this group. The common conditions leading to the syndrome are age related macular degeneration, glaucoma and cataract. The hallucinations may last from a few seconds to most of the day and may persist for a few days to many years, changing in frequency and complexity. Many patients can voluntarily modify them or make the image disappear if they close their eyes.. The imagery has no personal meaning and is varied and may include groups of people or children, animals, and panoramic countryside scenes.

The condition is named after the Swiss naturalist and philosopher Charles Bonnet. He reported the hallucinations of Charles Lullin, his 89 year old otherwise healthy and cognitively sound grandfather, who was blind owing to cataract and yet vividly saw men, women, birds, and buildings.

There is no definitive treatment for the condition but it is reported that reassurance and explanation that the visions are benign and do not signify mental illness has a powerful therapeutic effect. Hallucinatory activity may terminate spontaneously, on improving visual function or on addressing social isolation. There is no universally effective drug treatment but anticonvulsants may play a limited role. 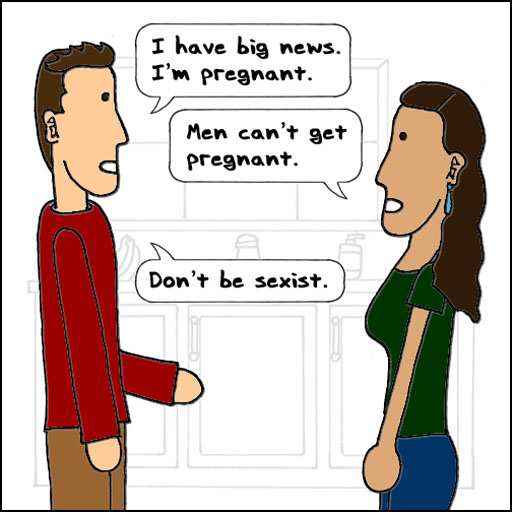 Also known as ‘sympathetic pregnancy’, Couvade syndrome affects biological fathers, particularly during the first and third trimesters of pregnancy, who suffer the somatic features of pregnancy.  Cessation of symptoms occurs upon birth or shortly within the postpartum period.  Rarely other relatives including children may be affected.

The syndrome is relatively common and epidemological studies report couvade symptoms in 11-36% of pregnancies predominantly affecting the gastrointestinal tract.  The commonly reportedsymptoms include indigestion, increased or decreased appetite,weight gain, diarrhea or constipation, headache, and toothache

There have been a large number of theories put forward to account for the origins of the syndrome.   It has most popularly been considered likely to be a somatic expression of anxiety.  Psychoanalytical theories contend that it is a consequence of the man’s envy of the woman’s procreative ability or foetal rivalry whilst psychosocial theories hold that it occurs due to the marginalisation of fatherhood and as part of a transitional crisis to parenthood. Paternal theories suggest a connection between the man’s involvement in pregnancy, role preparation and the syndrome.  Some of these theories have not been thoroughly investigated and findings are generally inconsistent.

Also know as erotomania, De Clérambault’s syndrome is one in which a delusional belief is held by a patient that another person, usually older and of higher social status, famous, wealthy or in a professional relationship with the patient is deeply in love with them.

Pursuing the object of their affections and repeatedly pestering them by telephone, by letter and with gifts is typical.  Some people suffering from this disorder arrange ‘holidays’ or ‘weddings’ with their supposed lover.

The condition is rare and has various aetiologies; it can surface in association with schizophrenia or affective disorders, or on its own as a single delusional disorder.  It is seen in forensic populations as a result of criminal acts secondary to the delusion and is one of a number of behaviours that may be associated with stalking.

The disorder is named after French psychiatrist Gaëtan Gatian de Clérambault (1872–1934), who published a review paper on the subject (Les Psychoses Passionelles) in 1921.  The syndrome has featured in popular works, perhaps the best well know of which is Ian McEwan’s Enduring Love.  It is thought to have effected John Hinckley, Jr. who shot President Regan in 1981 in an attempt to impress actress Jodie Foster, who he believed wanted a sign of his devotion.

Wikipedia – Erotomania
GPnotebook
Who named it?

Capgras syndrome is one in which a patient has a delusional belief that a person or persons, usually well known to them, have been replaced by an identical impostor(s).  It usually occurs in the context of a psychotic illness (more than half of cases are associated with schizophrenia) but may be seen with other psychiatric illnesses, including brain injury or dementia.

Joseph Capgras (1873-1950) was a French psychiatrist who first described the disorder in a 1923 paper co-authored with Reboul-Lachaux about the case of a French woman who complained that various ‘doubles’ had taken the place of people she knew.  They called this ‘L’illusion des sosies’ (the illusion of doubles).

Current thinking as to the cause of Capgras syndrome has focused on dysfunction of the inferior temporal cortex and the amydala.  The former is involved with recognising faces and the latter with the simultaneous emotional reaction.  These two structures can be damaged independently;  if the ability to recognise faces remains intact but the emotional reaction which makes them familiar is absent, it is hypothesised that the conculsion drawn will be that the person in question is an identical impostor.

Uncommon psychiatric syndromes – Enoch, Enoch and Ball – is an interesting book with chapters on this syndrome and others.  I read it on holiday in Syria, which I think shows true dedication to my cause.

nb: if anyone has a view on whether it’s ‘Capgras’ syndrome’ or ‘Capgras syndrome’ then I’d be pleased to hear it.

Also known as Todd’s syndrome, in this syndrome objects are misperceived, usually appearing larger (macrospia) or smaller (microspia) than they really are.  This will usually be associated with a distorted sense of time and with visual hallucinations.  Occurs most commonly with migraine, parietal lobe lesions and with hallucinogen intoxication.

Mental illness for the masses